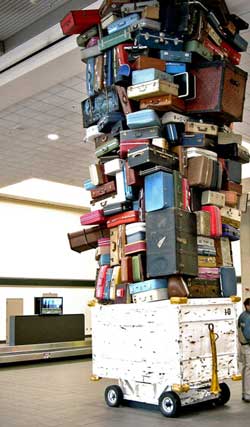 Here are some fun facts about luggage, handbags and backpacks:

According to the Oxford English Dictionary, the word luggage entered printed English in 1596. The word derived from the verb “lug,” as in “that which needs to be lugged about”.

Shakespeare used the word luggage in 1597 in Henry IV where the King’s son Hal asks his friend to “bring your luggage nobly on your back”.

Approximately 7 out of 1000 of luggage are mishandled by airline staff.

Luggage is officially declared lost if it has not been returned to its rightful owner within 21 days.

It is estimated that 1 million bags worldwide were never re-united with their owners in 2011.

While handbag as a term did not exist until the mid-nineteenth century, ancient pouches made of leather or cloth were used mainly by men to hold valuables and coins. (1

On average, women own 6 handbags and the average women’s handbag weighs 5.2 pounds. (2

New study has revealed that women’s handbags are contaminated with more bacteria than the average toilet. (3

The 2nd most expensive handbag ever made was created by a Japanese designer ‘Ginza Tanaka’ in 2008. The clutch was made of platinum and over 200 diamonds, costing a whopping $2 million.

Loaded backpacks should not weigh more than 15% (about one-sixth) of a student’s body weight. For a student weighing 100 pounds, this means that the backpack should weigh no more than 15 pounds. (4

The term “backpack” was invented in 1910. Before that the terms knapsack and packsack were used.

Martin is a bag enthusiastic and lead blogger at user bags. He reviews various top brands on his blog. Whether you are moving large files or are thinking about camping in the Alps, Martin knows what you exactly need. He has vast experience using different bags and is regarded as an authority when it comes to anything bags. Martin started travelling when he was young and realized that a well planned trip can be ruined by unsuitable bag. Whenever his out shopping the first store he will go to is a bag store. With time Martin has experimented with some of the best bag brands; making his opinion very sort after